I am looking for an email contact address or telephone number to contact Edwyn Collins regarding personal appearances. All help will be gratefully appreciated.

The best £3 you could spend!

I am just back from Piccadilly Waterstone's. I am very much looking forward to getting stuck into the book after the earlier reading and it was wonderful to hear you sing a mix of old and new songs! What a treat!
They say you shouldn't meet your hero's, but i dunno...!!

Wishing you lots of success with the book & looking forward to that Bloomsbury gig!

Dear Edwyn I follow your recovery and exploits through the national press and am pleased to hear you are back on the road again with projected gigs in Embra. Hot new band in Edinburgh is "the Bum Clocks" (the Scottish beatles) featuring Tam Dean Burns and Russell on drums and Malcom Ross and I trust you have already lined them up as your support act. Of course I am busy on the domestic front as Iris (18 months) is now a toddler. Delighted Grace has finished her account of your illness and… Continue

I hope nobody minds a little bit of self-promotion, but hopefuliy it is of some interest.

I've shoved my own review of Grace's book over at the music blog I look after.

If Edwyn has made any sort of impact on your life, then this book falls into the… Continue

Falling and Laughing at Latitude

hi, I'm the woman who went off on one about my mum and her head injury, thank you so much for the book, i'm really enjoying it. Would love to send you my mum's book, can I get an address to send it too. Also, as a poet I have found writing about my mums condition one of the best ways to deal with it and celebrate her as a person and how she inspires others by being such a positive loving person despite all the difficulties she faces. Heres two poems I have written about her, hope you enjoy and… Continue

upstairs in the cambridge eight o'clock

way way way back long ago we pretended to interview edwyn for the first horrific go at a rubbish fanzine. sat upstairs in the cambridge in soho with a whopping great radio/cassette with a comedy built in microphone we forgot everything we were going to ask him and tried to keep up with his trips to the bar. on the way home i had to get off the tube to be sick. being the considerate kind soul what i am i tried to be sick in a bin (there used to be bins on platforms children where could put… Continue

This was rather fun. A first for us both. Grace was quite scared, but we pulled it off. A lovely crowd in the literature tent, just before the thunder storm began. We got a tremendous soaking trying to get back to the car. I'm not keen on camping, you see! We stayed in Lavenham, an hour away, in a charming B&B, as we… Continue

Not being sure where to post this 'Comment' I am posting it everywhere. I have to admit how this stuff all works, and fits together, flummoxes me sometimes. I just have to grin and post it, and hope for the best.
Anyway, my comment to you went like this:
"Every time I play "The Glasgow School" I remember sitting on a park bench in Islay reading the news of your illness. It was a shocking moment, but I am glad to see that you are getting on with it all, and Moving On Up.
I am… Continue

Back home in Kilburn after a tremendous weekend. T in the Park was crazy. I loved it. Alex and Nick from Franz Ferdinand joined Malcolm and I, we did Sorry for Laughing, the Josef K song, which Malcolm wrote. It was for BBC 3, you can still see it on the i Player. I met so many people, did sessions, interviews. The show was wonderful for me, a great crowd who gave us such a reception. Singing along, all that. Love to the Maccabees, they were telling me that they were listening to Orange Juice… Continue 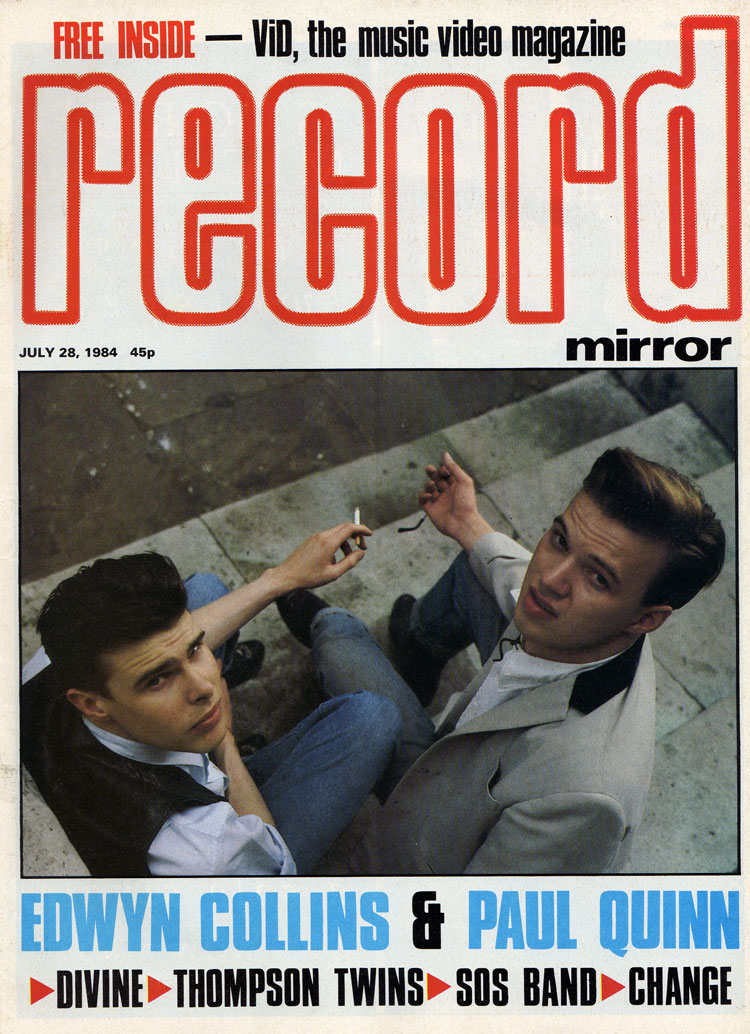 Hi just to let you know there is a new web page for all things Paul Quinn which has plenty of Edwyn in there too as you'd expect!

Look at this, lovely thing.
http://theportastylistic.blogspot.com/2009/03/popeyeedwyn-collins-is-still-alives.html

Dear Grace, I read your article today in the Telegraph magazine. Whilst studying for my D.Phil I read the following paper:

Falling and Laughing, Grace's book, there are extracts in today's Telegraph Magazine. Oh how exciting! Here's my review of the book. Not bad for a beginner.
No, I must admit, I'm proud of her, it's a jolly good read. Seb found it hard to read, about my hospital experience and all that, but it's funny too. I've had a funny life.
Cheerio,
Edwyn

I was thinking about Edwyn's music today, and decided see what news there might be of some new releases... and stumbled across this site. Glad to hear the bout with ill health has turned out well and new music is in the works.

I saw Edwyn live here in Atlanta Georgia back in 1994 and have been a fan ever since...his songs have stuck around in my mind and regularly float up to conscious awareness.

I have been gathering together an archive of messages sent to Edwyn while he was ill. There were so many and I appreciated them so much. They are all mixed up with my other email, so as I have extracted them have found some that I missed at the time. Here is one I have just stumbled upon. Startled and amazed by the things the internet throws up, I thought I would share it with you:

'This was posted on www.metafilter.com last week - I thought I'd pass
it along just in… Continue

I was at your Perth concert and thoroughly enjoyed your music.
I think your recovery is marvellous and I wish you all the best for the future.

Perth was a truly sublime gig. Edwyn was in great voice and very good humour and had excellent support from Carwyn and Andy on acoustic guitars. I've been a fan since the early days of Orange Juice, but hearing the songs played by a stripped back band really highlighted the greatness of the songs that Edwyn has written and continues to write. It really was music to stir the soul, and I have to admit to shedding a tear or two when they opened with "Falling and Laughing". The band received… Continue

How are you friends? Do you like my new site? I'm learning it myself. I'm perking up today after my day at the Ivors. I experienced tremendous euphoria. I won! What do you think about that? I'm playing an acoustic gig in Perth tomorrow night. I'll send a report and some film of it. I'm experimenting with my site.
Cheerio for now
Love Edwyn

In summer 2008, some very special people customized my heron drawing which adorned the sleeve of my single, 'Home Again.'
You can see all of the artworks here:
http://www.emirecords.co.uk/edwyncollins/gallerytest.html