And stopping the song dead to do it, the band balanced it against a restart that tripped you straight back into the pleasure.
With echoes of Devo – and even glam rock soaking up through The Box, it should have been no surprise that a band with the charm – and balls – of the 1990s could get away with their cover of Kraftwerk's Radioactivity... without a synth in sight!
One of Scotland's true pop legends, EDWYN COLLINS may use his dapper silver-topped cane to help him to the box he sits on on centre stage, but it was just fantastic on Monday night at the Ironworks to see him performing so strongly.
Though the impact of the two brain haemorrhages back in 2005 means others take over guitar duties, that weird, wobbly wonderful voice is stronger than ever.
Just speaking to announce the titles of opening Orange Juice triple whammy – Falling And Laughing, Poor Old Soul and What Presence?! – Edwyn was well warmed up by the end of it.
And in a set that trawled both the Orange Juice back catalogue and also offered a reminder of just how many great solo albums have followed, best news of all was the brace of new songs that signalled continuing progress.
New song I'm Losing Sleep was described by Edwyn as "kind of Northern Soul, kind of punk rock and it's kind of disco". And that all made perfect sense once the song was played.
"I'm losing sleep/ I'm losing dignity/Everything I own is right in front of me," he sang. Simpler lyrics, maybe, than young Edwyn would have dreamed up – lover of wordplay and wry wit. But that and What Is My Role have a power that comes from the heart that hits ours, square on... not to mention the melodies that beckon the dancing muscles too!
Though Edwyn's speech is sometimes halting as he searches for the right word, his sense of humour has never been pithier. 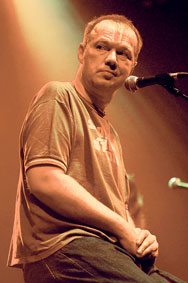 Edwyn Collins. Iona Spence
"Go on Edwyn, we love you!" yelled some excited fans down the front as he returned for the encore.
"I don't know that one..." the star joked.
The band was a joy both to watch and listen to. For example, Barrie Cadogan offered some inspired guitar-playing for the sublime jangle of Rip It Up – while Carwyn Ellis added the sucky kerplunk of a bassline that has just found new life bizarrely in a Beverley Knight song!
Returning for what turned out to be a four-song encore, Edwyn also added playing harmonica to Gorgeous George's Low Expectations.
By Blue Boy – taking the more mature fan back once more to Orange Juice's golden hours – Edwyn and band had supplied an unforgettable, joyful night.
So the sustained standing ovation came as no surprise. MC